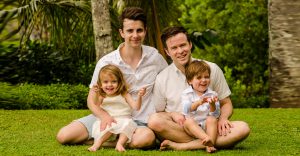 LGBT parenting is generally referred to lesbian, gay, bisexual, and transgender (LGBT) people who are either raising or fostering the Childs all by themselves. The category includes children’s raised by same-sex couples, single LGBT parents, and couple in which one of the partner is an LGBT.

Moreover, LGBT people can parent a child via various means which includes partner from their past or relationships, co-parenting, donor insemination, adoption, reciprocal IVF, and surrogacy.

Gay, lesbian, or transgender people who choose to transit later in life do have a possibility of having children from opposite sex relationships or mixed orientation marriages.

Moreover, most of the kids doesn’t even know that they have been parented by LGBT couples and is some of the cases, the couples itself decides not to disclose the same to their children. Most importantly, this doesn’t even co-relate to the fact that how those kids are going to react when they find out about the sex orientation of their parent and rather its more about the perceptions and circumstances LGBT couples go through in the whole process of parenting a child.

If we look around at different societies across the globe, it all depends on the state law of that particular geographical location which would impact the overall same sex parenting arrangement. For example if we talk about US only, 33 percent of female same-sex couples households and 22 percent of male same-sex couples households have reportedly raised at least one child under the age of 18 .By the year 2005, almost  270,313 children in the United States were reported to be living in the LGBT households.

LGBT Adoption and their challenges

If we talk about adoption in various countries worldwide, it is legal for same sex couples in 27 countries along with some sub national territories. Moreover, around 5 countries have legalized certain forms of step child adoption.

Quite interestingly in 2008, the European court of human rights has given the ruling that a legally qualified and suitable person cannot be deprived of adoption based on his or her sexual orientation. Other judgments in the same regards came from USA where the court understood that there isn’t any difference in parenting standards involving same sex couples to that of straight ones.

Even certain scientific researchers have confirmed that when they compared the outcomes of children with gay and lesbian parents with same for children with heterosexual parents, they came to realize that children raised by same-sex couples are as healthy, capable and happy as by opposite-sex couples. Still social discrimination and legal bindings are something which most of them go through in their quest to raise the kids eventually.